You’re giving a presentation in front of your department. In the middle of your talk, your colleague Brad interrupts you and challenges one of your conclusions. Your pulse climbs as he leans back in his chair, looking smug. A throbbing sensation builds in your temple. Your field of vision narrows, maybe you feel a bit dizzy – and you lash out. It feels good in the moment, but in retrospect, what you said wasn’t very tactful or very clever. Brad’s comment and your own reaction start to fester in your mind.

Personally, I’ve gone through this more times than I’d like to admit. When I look back later, I usually think, “Man, I could have handled that a lot better. Not only did I make a fool of myself, I probably just made matters worse with Brad.” Even if his comment was inappropriate, but I usually feel more frustrated with myself and my short temper.

Do you ever wonder why that happens – the dizziness, the lightheadedness, the rush of adrenaline? Or, maybe more importantly, what we can do to keep our cool in tense situations like that? To answer those questions, we’ll have to spend a minute talking about our old friend, the Lizard Brain.

The lizard brain is the oldest and least developed part of the human brain, and it’s at the center of our outburst towards Brad. The throbbing sensation in our head, tunnel vision, and lightheadedness are signs of a lizard brain takeover. Brain functions like language, reasoning, and memory get hijacked by the reptilian brain’s most basic instinct: fight or flight. 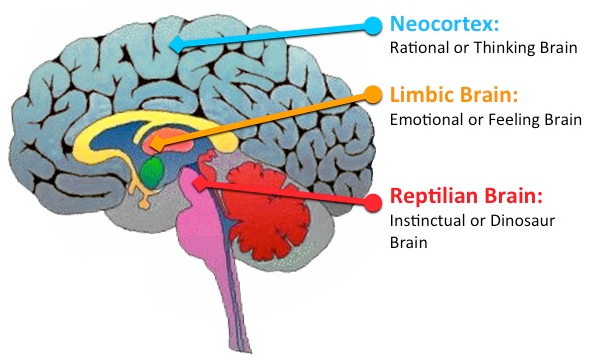 (There’s actually more to the story – the mental meltdown is caused by an interaction between lizard brain and two tiny lobes in the limbic brain called amygdalae. But for the sake of simplicity, we’ll call the whole complex the lizard brain.)

The fight-or-flight instinct isn’t bad in and of itself. It can save your life if you’re being chased by a predator or if you’re under attack from the cavemen one hill over. But as you’ve probably found, it’s less helpful when the caveman is your supervisor delivering a disappointing performance review. In social situations, we’re more effective if we help our lizard brain understand when we need it and when we don’t.

This fight-or-flight instinct is a reflexive one. Lash out, strike first – burn bridges now and feel the pang of regret later. These impulses are powerful, and they can feel almost automatic. But with a little conscious effort, we can respond reflectively instead.

When we’re thinking reflectively, we look for the reasons behind the frustration and what we can do to resolve them. Instead of lashing out at Brad, I ask him how he came to his conclusions – and if we could put our heads together before the presentation next time. (Searching for reasons doesn’t mean we can’t also hold people accountable.)

By nudging our assumptions toward the reflective side, we build brain circuitry for curiosity and calm, instead of hostility and agitation. This is a phenomenon known as neuroplasticity. The more we reinforce those neural pathways, the more our lizard brain starts to get the message. “We’re not under threat, everything’s OK, and we’re going to handle this rationally. Now go back to sleep, dear.”

If our knee-jerk reaction to frustrations and challenges is to get hotheaded, we lose most of the brain functions we need for problem solving. That can easily lead to strained relationships and heartache. But if we make a habit of responding reflectively – opening the dialogue and searching for solutions – we can take an approach that helps us stay effective and approachable.

I won’t deny that sometimes when we reach out to someone, we get burned. Maybe Brad really does just want to one-up me. It’s happened before and it will happen again, but I can honestly say that I’ve never regretted making the effort. In fact, I’m often shocked by how well it goes. I guess my lizard brain is still trying to get me to temper my expectations.

Ben Martin specializes in research and business development at Thera Rising. When he’s not out delivering seminars, he oversees client outreach and digital development.

Want to see more? Subscribe to have new posts delivered to your inbox!